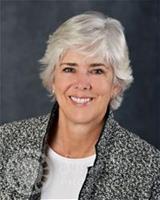 Sue grew up in Connecticut and attended the local public schools along with her three sisters. Her father, a retired judge, and mother were both very active in civic activities and involved the family in many of them.

Sue graduated from Bucknell University in 1981 with a Bachelor’s in Business Administration. Following her interest in business and finance she went into banking. She worked for several banking institutions and simultaneously earned her MBA from The Wharton School at The University of Pennsylvania.

In 1995, she moved to the Bay Area, and worked as a Vice President for Bank of America Leasing. She then moved to GATX, where she became the Chief Risk Officer and then the Senior Vice President of Air Operations.

Shortly after moving to the Bay Area, she met her husband Charlie. They moved to Pleasant Hill in 1998 and their son Will was born in 2001. He attended Strandwood Elementary, Pleasant Hill Middle School and graduated College Park High School.

Sue chose to leave the corporate world in 2007. Since then she has co-founded the Foundation for Pleasant Hill Education (where she has been the President, Treasurer, Grant Chair, and organizer of the Amazing Race), served as the President of Strandwood Elementary PTA and Pleasant Hill Middle School PTSA, chaired the 2010 Measure C Bond Oversight Committee, served on Pleasant Hill Rotary, and coached numerous baseball and soccer teams for her son and his classmates.

She has been working on the new library project since its inception and is looking forward to the completion of the project next spring.